Engineer 2nd grade from the 3rd Structural Design Committee of Odrixia. She is well versed with the outside world due to her years as stage technician in Elisa’s theatre projects, but this adventure is an advanced study trip to a location which was supposed to have never existed. Head-strong beyond measure and with a considerably weird taste of humor, Olazábal is often a less than ideal travel companion, but she is considered life-savingly important by everyone due her techno-skills in healing. Her apparatuses make healing even a grave wound possible, which most consider to be magic, whereas Olazábal herself is content with saying: ”It’s just a well designed piece of technology. Study more.”

Like most female dwarves, Olazábal is bearded and thoroughly muscular.

A former general of the mightiest army in the whole of Zanziar, the 5th Legion of Gory. Sullen and obviously haunted by some dark events in his past, Bastian’s commanding voice and tactical skills are only surpassed by his excellence with a sword. The reasons for Bastian’s interest to endanger his life in this foolhardy effort are not known, but it’s safe to assume that seeking resolution with his past might have a lot to do with it.

Part of his less known resume reveals versatility in poetry and military tactics, which he combines in surprising situation, likely as much to annoy than to enjoy.

Some years ago, Elisa was the leading statesman of the Elven cities, but as she put it “went out of fashion”. Now she uses her formidable magic arts to repay a lost bet to Olazabal.

Elisa is known for her linguistic skills and excellence in short stories, yet her true fame comes from the theatre plays she has written, directed and often performed in. For over a hundred years she has honed her use of magic to perform better theatre tricks. Sharp tongued, witty, enigmatic, and without respect for any customs, fashions, or authorities would describe Elisa very well, but one should not forget her startling looks and immense wisdom.

The prophet of the new coming of the True God – or a scammer of mind-boggling scale – opinions about Simma vary widely. Simma is long and fragile for a hobbit, which is intensified by his melancholic demeanor, yet there are very few more enigmatic public speakers than him. Simma saw the demon cult’s location in a vision from the True God and contacted Neshilim.

Groggy, enigmatic and irritating are the most often used adjectives to describe Simma, who sees all of those be just the flip sides of devotion. Simma bears the mental scars of years of slavery and serfdom, which was made only worse by his absolute lack of respect of any authority not set by himself.

Despite years in the upper echelons of the secret service of the political apparatus of Gory, Niffil still retains his original street-dude attitude strangely combined with upper class outlook.

One would never guess from his appearance that Niffil orchestrated several black ops teams who struck hard against traders trying to find a way around the state’s trade monopoly. Dark back alleys of Gorian towns tell stories of Niffil even doing a couple of assassinations by himself, yet no witnesses have ever materialized.

Niffil is known for nimble fingers, good hand-eye coordination and determination to survive even if the odds are low. 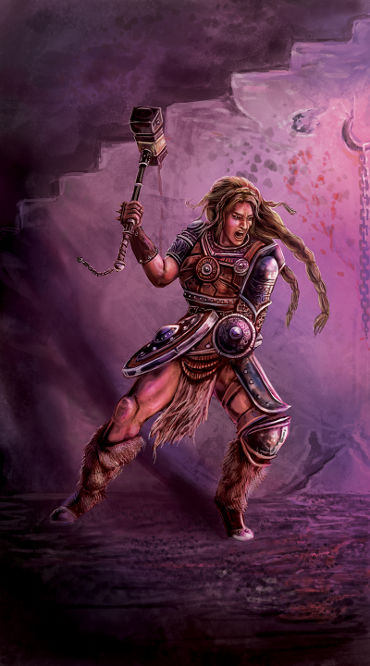 Hailing from the Northern Isles, Tyra comes like a viking warrior of legend. She was a skilled protector at an early age, and her berserker spirit elevated her among the tribe to a higher status than anyone would have predicted.

That all changed when she met and befriended Simma, whose enigmatic devotion and disdain of authority were so outside of Tyra’s experience that she couldn’t help but abandon her old life to follow him.

Tyra is now seen by most as silent, cold and brooding, only truly rousing to life during battle. 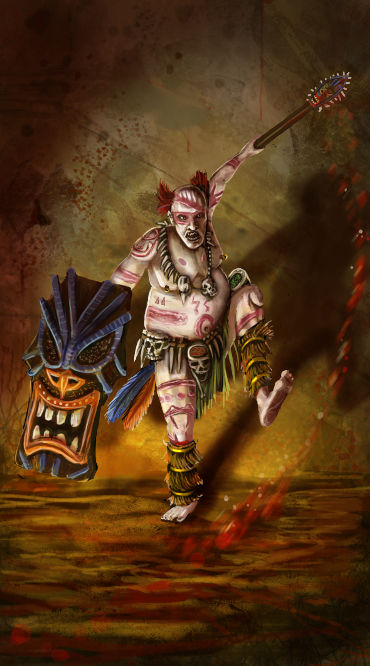 Mogba’gh is a feared shaman, a ju-ju man with unparalleled powers and even here, far away from the nature spirits of the ancestral forest, Mogba’gh wields abilities beyond comprehension. It’s said that he is not an albino by birth, but rather became one due to a botched witchery.

It’s not known by anyone but Elisa why Mogba’gh is here or what he aims to do, but so far everyone has been very content with the idea of having another magus in their midst, even if he is strange as him.

Mogba’ghs pointily filed teeth, his general behaviour and dark stories about culinary pleasures have formed a reputation of a repugnant, barbaric cannibal that he seems to enjoy and cultivate at every possible instant. 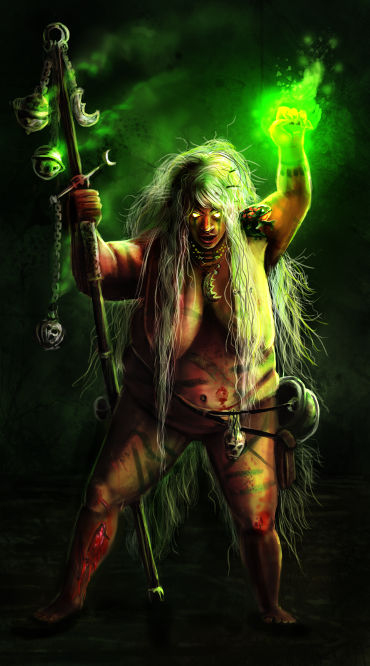 A middle-aged halfling witch. She was blessed with strong magical skills, but those same skills have also molded her nature such that it’s all but impossible for her to remain among “civilized people”. By nature she is an extrovert and a fatalist, but she possesses a strong charisma. She is not a loner, though all witches tend to limit their associations with the mundane world. In her youth she was a house slave of a human family in the metropolis of Gory, and she hated every moment of it. Witches always focus their powers on one aspect of magic or another; hers being transmutation and transference. 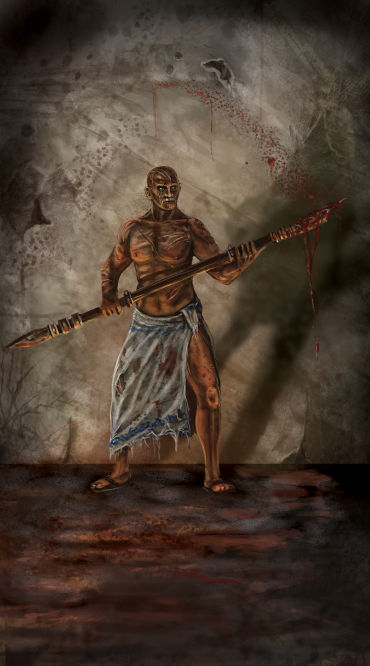 Just a year ago the whole country of Vidal-Sis was under the iron fist of the clergy led by High Priest Neshilim, then a peasant revolt backed by neighboring countries and Demon cultists changed the balance. Dreams of returning to former glory and power can only come true if the Demon cult is annihilated and Neshilim returns to temple city alive… with the head of the demon as solid proof of clandestine forces behind the current anarchy.

Losing his position hammered newborn spirituality, understanding the meaning of a religion and a measures of humility to Neshilim’s core, which was formerly built from ruthless efficiency and absolute power topped with an obsession for physical fitness.