Disclaimer: The rulebook is by no means finished in layout nor in the editing part, but the rules themselves have been rather meticulously tested and honed. Should you find something worth of asking, make sure to do so. We really aim to polish the rules to a fine standard.

Perdition’s Mouth: Abyssal Rift can be played in either standalone or campaign mode. In campaign mode all scenarios are linked and the outcome of each game session pays off later in following sessions.

In both modes the goal of the game is the same: make it to the labyrinth’s exit… alive!

Each scenario is played out through rounds of combat against enemies controlled by the game itself. In each round, players will choose an action from the Rock of Destiny. 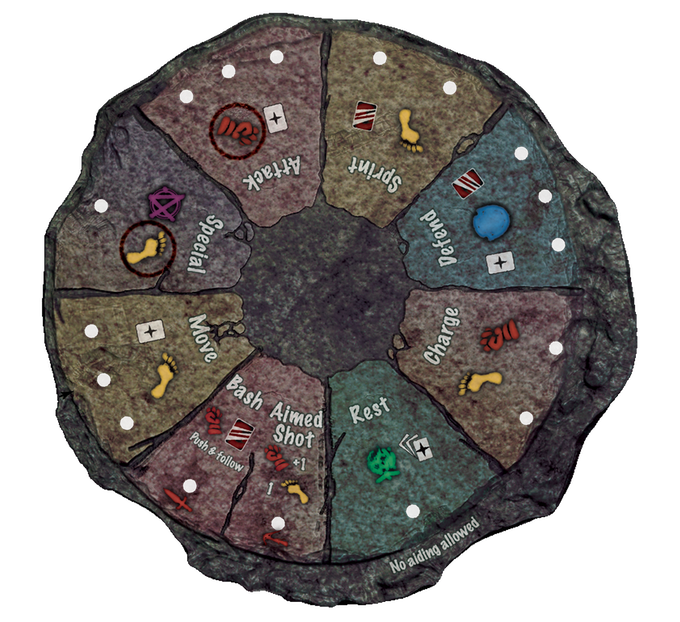 The limited number of spots on each action means that players must collaborate and make meaningful choices about when to activate them, encouraging them to discuss how best to achieve their goals before the scenario overwhelms them. Lone wolves never last long in Perdition’s Mouth.

Each Hero has a sheet showing the values of your character’s five attributes: Action Points, Range, Hit Points, Attack, and Defense.

Players gain action points according to their character sheet and may spend them to perform actions from the Rock of Destiny like moving, attacking and using powerful special abilities. 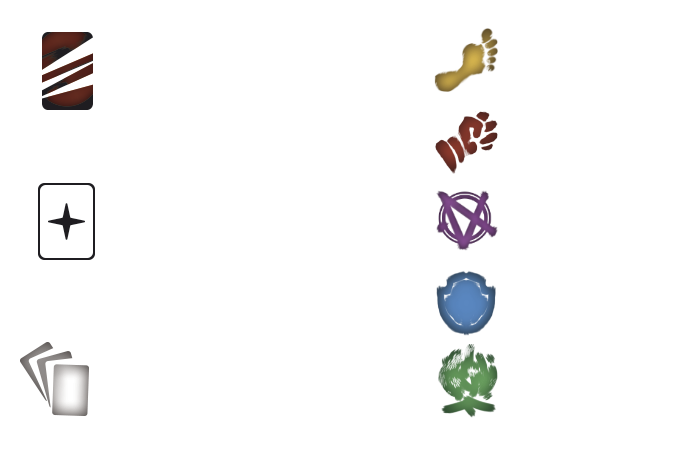 Each hero has a unique deck of Hero cards. There are two type of cards in every Hero’s deck:

Match the symbols of the actions on the Rock of Destiny with those shown on your Hero cards to play them. If you can’t match the symbols, you may improvise and play them as multi-purpose +1 cards instead.

Aiding your fellow heroes is one of the core mechanics in Perdition’s Mouth, and it may well be the difference between survival and defeat. You can play your Hero cards during other players’ turns to help them beat enemies, move faster, open or break doors and treasure chests, and much more.

However, there is an element of chaos and dread inherent to any life-or-death struggle. Will your hand shake when aiming at an overpowered enemy? What about picking a lock while running away from a bunch of bloodthirsty pursuers?

Match the symbols of the actions on the Rock of Destiny with those shown on your Hero cards to play them. If you can’t match the symbols, you may improvise and play them as multi-purpose +1 cards instead.

Aiding your fellow heroes is one of the core mechanics in Perdition’s Mouth, and it may well be the difference between survival and defeat. You can play your Hero cards during other players’ turns to help them beat enemies, move faster, open or break doors and treasure chests, and much more.

However, there is an element of chaos and dread inherent to any life-or-death struggle. Will your hand shake when aiming at an overpowered enemy? What about picking a lock while running away from a bunch of bloodthirsty pursuers?

You draw Response Cards when performing certain actions, like during combat. The number stated on the cards will then apply to and modify the results. Sometimes the chaos will act in your favor, but other times your problems will just get worse.

Each round in Perdition’s Mouth consists of two phases: the Hero Phase and the Enemy Phase. During the Hero Phase each player, in player-chosen order, selects and performs one action from the Rock of Destiny.

You need to spend 1 Action Point per Action Spoke to move around the Rock of Destiny. You might not have enough Action Points to always be able to reach any Action Spoke, though you get to skip over an Action Spoke if all its peg holes are occupied. This makes the order of play even more critical!

Choose your actions carefully! Since you cannot remain on the same spoke, think ahead to your next turn when you will have to choose a different action, and consider the number of Action Points you’ll have to spend to reach the desired spoke.

Move / Sprint: Most of the time you will use these actions to move onto an adjacent square. But be cautious, there are many dangerous squares that may require a soft step. Perdition’s Mouth: Abyssal Rift includes rules for many different terrains, such as rubble, cliffs, and water, each with their own cost in Action Points and penalties for unwary characters. 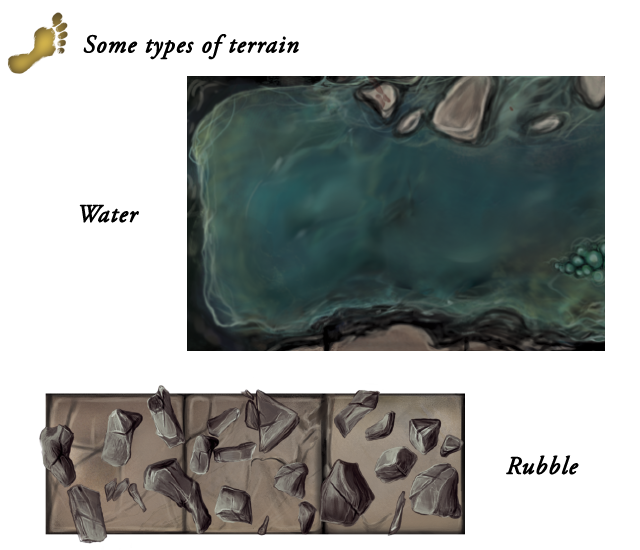 But that’s not all! You may also perform other movement actions, including opening and closing doors, picking the lock of secured doors to gain access to hidden passage or reveal the wonders (or traps) hidden in treasure chests, and many others: teleporting, looting bodies, rescuing victims… 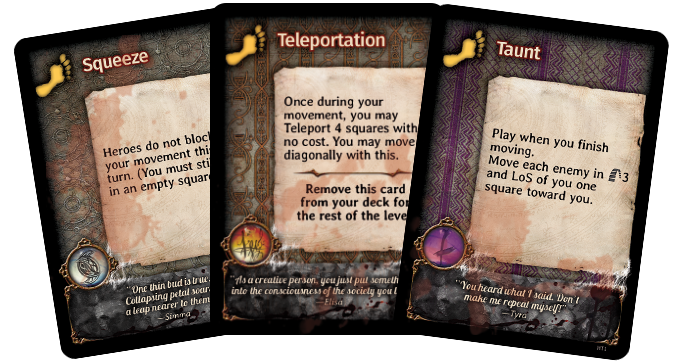 Attack: Perform 1 attack against any enemy within your range (i.e. number of squares) and line of vision, using your Attack value. Then draw one Response card and add its value to your target’s Defense value. 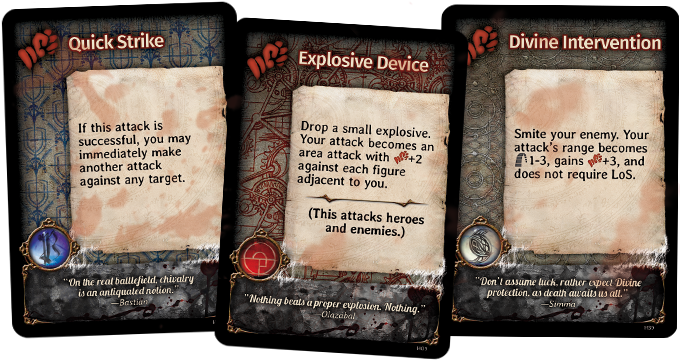 Bash / Aim Shot: These actions share the same spoke, and may only be used by melee or ranged Heroes, respectively. They give additional bonuses to your attack, and add an extra degree of tactical choice to the players, as they just have one peg hole each.

Charge: Combine Move and Attack actions together during the same turn.

Defence: Sometimes a good defense is also the best offense. Though you may play feat and numeric defense Hero cards whenever you are attacked, you only draw Response cards to boost your defense if your Hero peg stands in the Defense Spoke.

If your enemy’s attack is higher than your defense, you lose one Hit Point and gain 1 Wound card.

The Hero Sheet includes a Hit Point Meter to track the health of your character. You must use the attributes on the same line as your Hero’s current Hit Points, so their values change as your character takes damage.

Any Wound card you receive will become part of your Hero Cards deck. They act as negative numeric cards, thereby weakening your actions. Even worse, they take up space in your hand until healed or played. They stay in your Hero’s deck until healed, even when progressing from one scenario to the next! As you can see, getting wounded in Perdition’s Mouth has severe consequences. 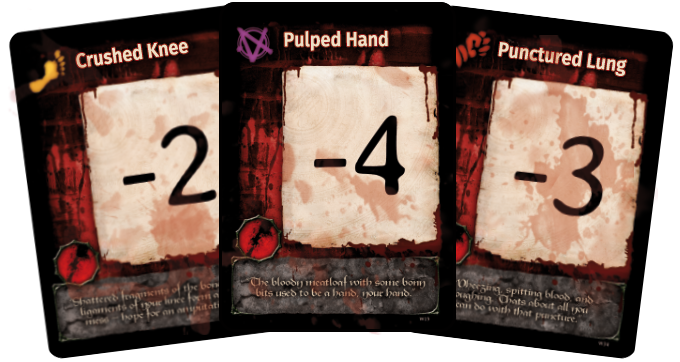 Special: You may perform as many special abilities as you wish, either from your Hero sheet or by playing feat Hero cards, and in any order of your choice. 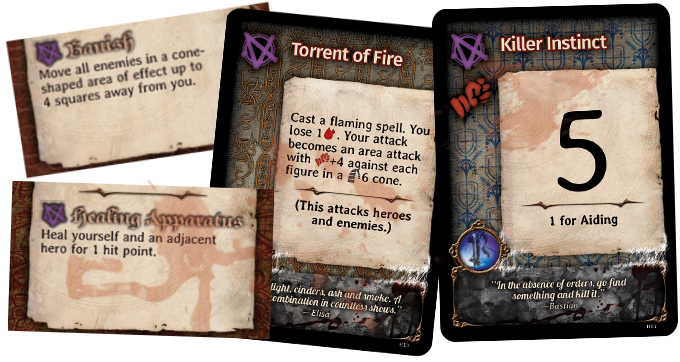 Rest: Resting is the only way to shuffle your discarded Hero cards back into your Hero deck and to refill your hand of Hero cards. You cannot aid other Heroes while your Hero peg is in this spoke.

If you’re brave enough, during your campaign you may get yourself some additional items and gear to give your character some extra help in upcoming battles. Treasure Cards are added to your backpack and you can equip and use them at any time. 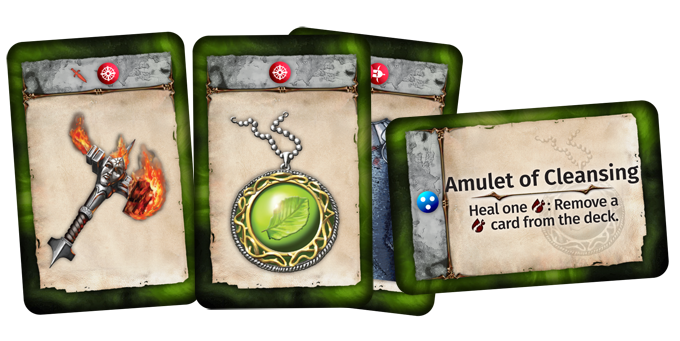 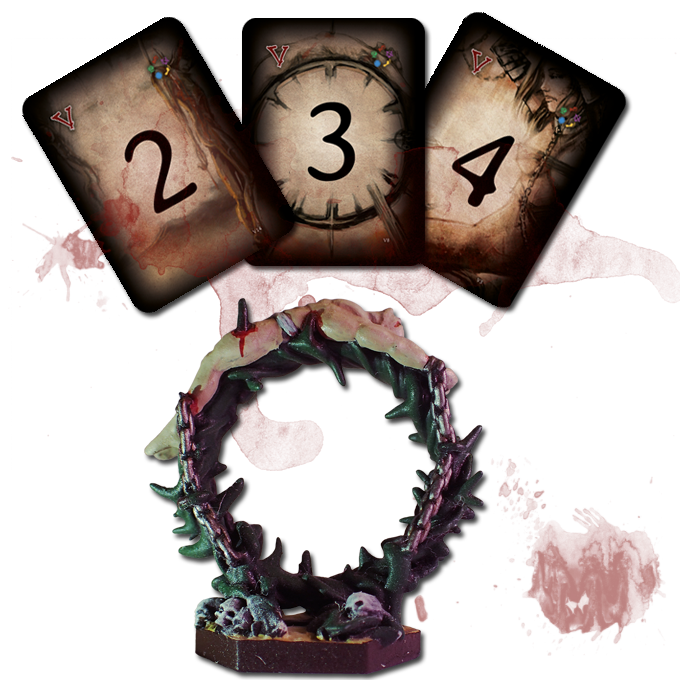 Once all players have completed their turns, the Enemy phase takes place, which is controlled by the Enemy Wachstone. 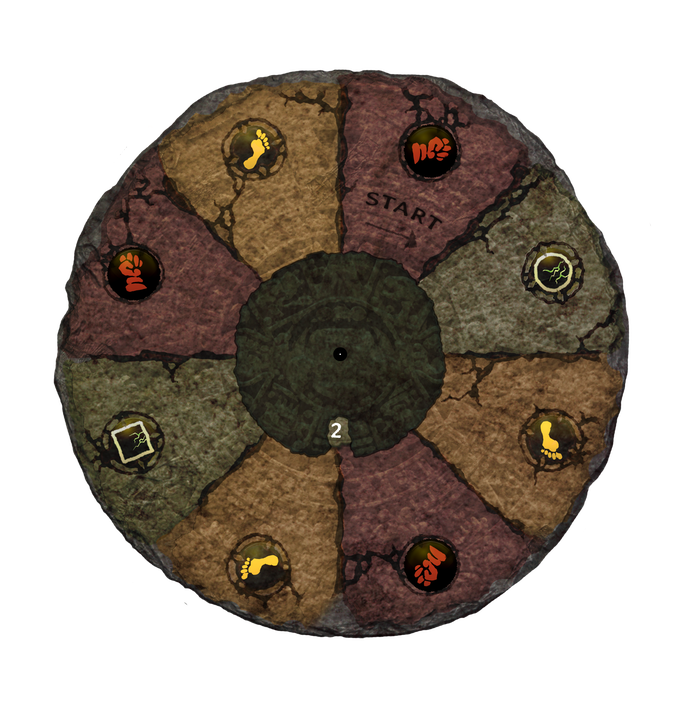 The central wheel of the Enemy Watchstone is a dial, which can be rotated to track the Threat level of the scenario (the image above depicts a current Threat level of 2). The Threat level represents how dangerous you are as perceived by the cultists, and it changes during the game depending on your actions.

The Enemy phase begins by drawing a Response card. The number on this card determines how many spokes the enemy peg moves clockwise on the Enemy Watchstone. Then all enemies perform all of the actions the enemy peg has moved through, not just the last one the peg ended in.